Literally, Darling » Blog » A Song of Ice And Fire » Life Lessons From Game Of Thrones

A Letter To My 40-Year-Old Self

In honor of the almighty “Game of Thrones” returning to HBO this weekend and the fact that LD is comprised of some super-mega-foxy-awesome-nerds, we’re bringing you the practical life lessons we’ve learned from one of our favorite shows. And for reals y’all, it’s one of our favorites—for the last week we’ve pretty much reverted to “Game of Thrones” fangirls and lost any and all productivity. See? (This might be how we’ve gotten the reputation for being children running amok on the Internet).

So without further ado, we bring you valuable lessons from “Game of Thrones:”

Winter is Coming… AND NEVER LEAVING.

GoT has become so popular that it is affecting our own seasons—instead of months they linger for years and teach us that SPRING IS A LIE and we are sweet summer children ill-prepared for the long nights. The night is dark and full of terrors.

Try walking through house in the middle of the night without the lights on and tell us it is not full of shadows waiting to stab you through the heart (or stub your toe). 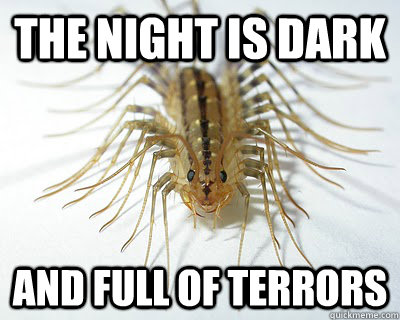 Life is too short to not take what you want.

Want that promotion, new dress, or the Iron Throne? Just get up the gumption and take it.

The bravest in all of Westeros is a little girl, the fiercest knight is a woman, and the last dragon is an orphaned teenager. Take those gender roles and shove them down the lion’s gullet.

Threaten to strangle people in their sleep.

Someone on your nerves? Talking about you behind your back? Talking at all? Take a lesson from everyone’s favorite head bitch Cersei Lannister and just threaten to have them choked to death while they sleep.

Tyrion Lannister may be the “Imp” but his cunning, deft diplomacy, and sharp tongue cut his enemies off at the knees faster than even a sellsword. They may make fun of him but they’re not laughing after he’s shipped them off to the wall, dungeons, or death. Classic case that brains can defeat brawn.

Don’t ever mess with Mom.

Whether she be a lion, wolf, or dragon you don’t ever want to get between a mother and her children because you will not live to see morn. Besides when mom’s harping about things like not climbing, she may in fact be keeping the entire world from going to war. J/S…

Listen to the instincts of your pet (direwolves).

Have there ever been more useful pets than the Stark kids’ drewolves? Grey Wind helped Robb win every battle he fought, Summer lets Bran run without legs, Shaggy Dog is as wild as Rickon and every single one of them will eat the throat out of the enemies of their owners. So next time your dog thinks that dude you brought home is sketchy? LISTEN. 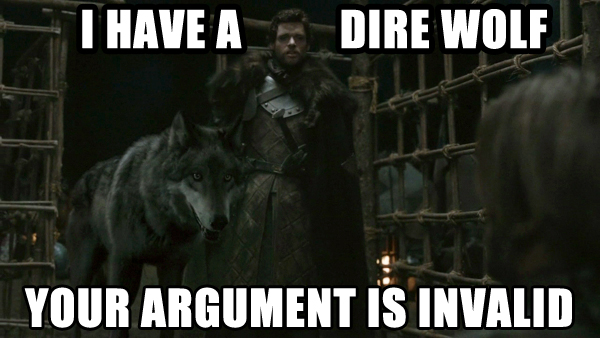 You Win or You Die.

But mostly you just die.

RSVP “NO” to all weddings.

It’s the excuse you’ve been waiting for all your life. No one wants to eat rubbery chicken, pretend to like the bride/groom, or DIE EN MASSE.

Sometimes things can be taken TOO literally (even for us). Ladies, strut your stuff (and search for dresses like Margaery’s…).

Reading about a skill does not a pro make… ahem, Samwell Tarly.

Snow: “We’re headed deeper and deeper into wilding territory! What would we do with her? who’s going to deliver a baby? You?”

Pride comes before a violent and painful fall.

Oh yes, Viserys, we’re looking at you. From the start you were a total prick, but you died a fitting golden death. And your sister looked on with disdain. ‘Atta girl, Daenerys.

Beware of backstabbers and Kingslayers.

Are you happy to see me or is that a sword in your back? Sworn ally, brother, or arch enemy trust no one or you might end up with nothing but a red smile.

You actually should be scared of spiders.

It’s not so irrational to fear spiders when in fact they’re watching you, and Varys always knows your secrets even before you do.

Never go back on your word or your debts especially those that need be paid in vengeance.

You’ve heard about bringing a bomb to a knife fight? Yeah, well, smart ladies skip tedious steps like armies and diplomacy and go straight to dragonfire.

Say what you want about the Lannisters, but they do not care about anyone’s opinion. They do what they want and they get shit done.

Be it the honorable Catelyn Stark confessing to wishing death on an infant Jon Snow or Jaime Lannister revealing why he slayed the Mad King, characters in GoT prove that most people exist in a moral gray area.

Everything can change in the blink of an eye.

Just like in life, GoT hinges on moments that have immediate impact. Next time you feel like things aren’t happening fast enough, just remember how quick and cataclysmic Ned Stark’s beheading was.

Looking for powerful, beautiful, strong women who aren’t afraid to do what needs to be done while being exactly who they are? Look no further than GoT.

Wine is an appropriate solution for everything.

Waiting out an impending attack set to destroy the entire kingdom? Have some wine.

WHO RUN THIS MUTHA?!

Women lead the seven kingdoms, whether directly or through their powers of persuasion.

No character is safe no matter how beloved and the next books are likely just a vicious rumor started by Varys.

A Letter To My 40-Year-Old Self

Science Says Wine Is Good For You – In Moderation