Literally, Darling » Blog » glee » How TV Is Changing the Way We View Sexuality

My Completely Awkward First Day At The Office

There are a lot of rights movements going on at the moment. Maybe this is always the case, but with the help of social media it feels like the current issues have saturated our lives more than was even possible in the past.

Equality is always a pervasive issue. We haven’t reached all-around equality yet, so we’re still trying.

I see a growing light at the end of the tunnel. I’m an optimist like that. And in the past few years I’ve noticed a positive trend coming from a pretty surprising source: Television. The wizards behind the TV screen may be learning to use their powers for good, and it just might be helping us replace fear of the unknown with understanding and acceptance.

There’s been a hail storm of hate, confusion, miseducation, and oppression when it comes to sexuality since the dawn of time (okay maybe not quite that long ago, but still). More specifically, LGBTQ Rights have been an issue for a looooooong time. A big part of this comes from (in my opinion) how uncomfortable we are about sex (and by extension, sexuality) in general. Not everywhere, but in many conservative communities—national or local—there’s a very unhealthy and illogical practice of shhhh-ing any talk about sex. Like it’s something dirty and unnatural.

But not talking about something doesn’t automatically make it vanish from existence, it mostly just makes us ill-prepared to deal with reality. The worst part is, not understanding something can make us fearful, and fear can make us act out in less than nice ways.

We’re uncomfortable with what we don’t understand. It’s human. It’s a survival instinct.

This is where mass media comes into play.

Although the media often has the reputation for making our lives worse—shrinking our brains rather than expanding them—TV shows have taken a slightly more LGBTQ-friendly turn. And personally, I think that’s a great thing. Recently there have been some prominent TV characters who identify as part of the LGBTQ community (although the Trans and asexual crowds are still very much underrepresented).

Shows that have included a more well-rounded cast of characters include:

A wildly popular show (although I’ll admit I don’t really understand why) full of singing and dancing in high school halls and beyond. It’s basically a weekly musical. Glee has a few main characters who identify as gay or bisexual, as well as portraying those characters in homosexual relationships during the show. Kurt (played by Chris Colfer) was the show’s first gay character, and during the show he comes out, first to one friend, then to others—including a very accepting and loving father.

I fell in love with this show from the first episode. It about Leonardo Da Vinci as a young man, with a sort of superhero-ish twist.

Historically the famous painter is believed to have been homosexual. The series doesn’t portray him as exclusively homosexual however, as most of his on-screen relationships are with women. However, there is definitely an implication that he isn’t straight.

I read some reviews of one this one and some people were really upset either that 1) The creators chose to portray Da Vinci as gay or bi, or 2) That the creators “straight-washed” the character by having him deny that he was only genuinely interested in other men.

This comedy was cancelled after the first season, which makes me sad because I thought it was really good. It portrayed the life of a gay couple who were expecting their first child, via a surrogate. It touched on the challenges of being an openly gay couple today, but without being super political and pushy about it.

Supernatural is a show about the two Winchester brothers (and no, that’s not the gay part… unless you take certain turns down Fandom Lane—don’t say I didn’t warn you) who hunt all sorts of supernatural monsters.

A fairly recent character, Charlie (played by Felicia Day), was introduced on the show as a computer hacker that helps the brothers out on one of their cases. During the stakeout, she lets them know that she’s not into guys, and in later episodes she openly flirts with other women.

Neither of the Winchester brothers seem to care much either way, and Charlie has become a regular on the show and a fan favorite.

A BBC show and spin-off of “Doctor Who” about a secret organization called Torchwood. Torchwood steps in when things get extraterrestrial, and the organization is run by Captain Jack Harkness (played by John Barrowman). 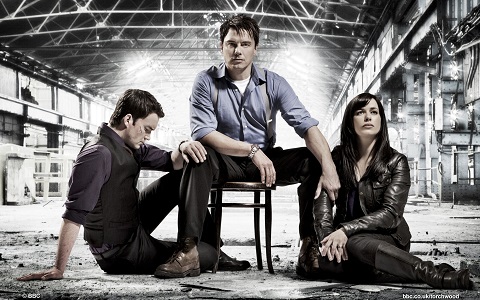 Although creators of the show have said that Captain Harkness is not gay, he has many on-screen relationships with men. Rather than calling him gay, he’s been labeled as “omnisexual.” Basically he’ll sleep with anyone and anything. Regardless of exactly what sexuality label you want to apply here, Captain Harkness is an extremely popular character who represents a clear breakaway from gay stereotypes. He’s tough, complicated, get’s sh*t done, and occasionally makes out with any number of people, male or female.

The popular MTV show about werewolves and other things that go bump in the night has included a gay character named Danny since the show’s beginning. Danny (played by Keahu Kahuanui) is a well-liked openly gay high school student who plays on the same lacrosse team as the show’s main character, Scott. The show also introduced another gay character (one of two werewolf twins) who became a love interest for Danny later on. The fact that Danny is gay brought up from time to time, but never (that I’m aware of) in a negative way. It’s either about how everybody likes Danny, or…

None of that OMG he’s gay and in the guy’s locker roooooom ridiculousness.

There are many more, but basically the point is that characters who identify as gay or bi are becoming quite normal, and I think that’s a good thing. Why? Because it helps desensitize those who are uncomfortable with homosexuality.

It makes someone introducing their same-sex partner less shocking. It gives people watching the show a visual on what reaction is appropriate when finding out someone isn’t straight, and can illustrate how prejudice affects people in the LGBTQ community in a way that’s more impactful than just hearing about it on the news. The media, celebrities, and TV shows act as role models to many, so if someone’s favorite character doesn’t have a problem with finding out their friend is gay, maybe some will start to get past their preconceived notions. Seeing characters that are LGBTQ helps normalize the idea of LGBTQ people in general.

It’s not shocking. It’s not scary.

I think (or I hope) that most people who react with hate or anger toward LGBTQ people don’t really want to make another person feel terrible about themselves, they’re just profoundly uncomfortable with the idea and don’t know how to handle it any differently. TV shows and movies that include these types of characters and storylines can open eyes, and create simple human empathy where there once was only a fear of the unknown.

Hannah is a freelance writer and editor who lives with four furry, persistent animals. She has a degree in psychology, and therefore can read minds. Due to someone’s questionable judgement she has been given Internet access, so she now does the website thing. Follow her on Twitter @1curiouswriter.

Give Your Playlist A “Renovation”: New Music From Eric Leva

I Thought My Soulmate Was My Gay Best Friend