Why Don’t We Wear The Fashion Trends We Support?

Spoiler alert: A lot of white people don’t entirely understand racism. Even educated, well-meaning, white feminists and advocates for social justice often miss the mark when talking about race. I am sure that I (a white person and a feminist) have been personally guilty of it (in fact, I realize with some anxiety that I could be guilty of it right now). And I get that it’s jarring to be called out for something that wasn’t your intention, and it’s natural to want to leap to your own defense. But if we really want to be defenders of equality and social justice, we need to take a step back from the way we see ourselves and put the concerns of those with first-hand experience first.

Celebrities, journalists, and other women who have a platform to champion their beliefs are the most visibility guilty of failing to be intersectional in their feminism, and handfuls of them, from Taylor Swift to Patricia Arquette, have (rightfully) come under scrutiny for it. And that’s not to say that these women are capital-R-racists or that they aren’t good people; it’s to say that racism is not as simple as a personality trait that bad people have and good people don’t. Racism is an institution so long-standing and powerful that its influence is bred into all of us. It’s practically in the water in this country, and because of this, all white people are guilty of it.

Is someone like Amy Schumer’s internalized privilege worse than, say, the non-famous white girl in your office? Probably not, but it is perhaps more detrimental, because we look to celebrity feminists to set big, visible examples. As Bim Adewunmi wrote a few years ago on this topic at the Guardian, “When we have ‘heroes,’ we look up to them, and feel it especially keenly when they mess up.”

But, for those of us who don’t have mega-platforms, we can still do our best to be on the right side of feminist history. Instead of defending our heroes, we can learn from their mistakes. Instead of defending ourselves, we can acknowledge our missteps, acknowledge the systems that make such missteps seem okay, and act to destroy those systems instead of propagating them. In that interest, here are a few basic tips (brought to you by celebrity examples) on how NOT to respond when someone tells you your white privilege is showing.

1. Assume you are an expert on what is and isn’t racist.

Let’s start here: As a general rule, if a POC points out that something you’ve said or done has racist undertones that offend them, they are right. And they have a right to call you out on it. Because while you may have taken a course or two on race relations in college, they have had a lifelong, immersive education in it. Even if your intention was not to offend or to discriminate, these reactions are valid and deserve to be heard.

Take Lily Allen’s “Hard Out Here” video, which dropped a couple of years ago to much applause for its takedown of thin privilege and sexism in the music industry, as well as much controversy over its use of black female bodies as props to make these points. And yes, it was ironic, and largely a parody of “Blurred Lines,” and maybe these things can help us make sense of why it seemed OK to her, her director, and many of her fans. But authorial intent aside, Lily Allen doesn’t get to decide whether or not her video has a race problem. If an audience sees the problem, it’s because it’s there—Allen, as a white woman, simply has the privilege of not noticing it. Her response to the criticism, while thoughtful and well-meaning, insists that she knows best, and that the video “has nothing to do with race, at all”—because for her, it doesn’t. But a work of art is more than the sum of its creator’s conscious ideas, and Allen isn’t the authority on race issues in the music industry. The problems are there, whether or not she’s concerned with them.

2. Go on the defensive and refuse to hear your critics.

Put down your torches before reading this so you don’t catch on fire. pic.twitter.com/JyRQGvFuX8

I love Amy Schumer, but this response was so disappointing. It’s defensive, it’s dismissive, and it’s unproductive. As “a lover of all people,” she should respect people’s concerns about racist undertones in her acts, rather than telling them, with an air of superiority, that they didn’t get the joke. I do think it’s OK to joke about controversial subjects. I don’t think it’s OK to disregard the implications of some of those jokes. Schumer is known for her smart jokes about touchy subjects, particularly ones that affect women. It’s harder to be smart about something outside your experience and your comfort zone, and this is where she’s been said to have a blind spot around race. But this is a kind of willful blindness; the kind that can be overcome by the desire to look a little more carefully. Amy came back with a better response and a real apology a few days later, which hopefully means she will take these critiques to heart and bring a little more intersectionality into her feminist material in the future—at the very least, she stands out among other women who’ve made such mistakes in being willing to admit that she was wrong.

3. Make the fight for social justice all about you.

I’m looking at you here, Taylor.

@NICKIMINAJ I’ve done nothing but love & support you. It’s unlike you to pit women against each other. Maybe one of the men took your slot.. — Taylor Swift (@taylorswift13) July 21, 2015

We’ve all heard enough about this “feud” by now, but the conversation between TSwift and Nicki on Twitter—which Swift inserted herself into for no damn reason—is emblematic of the way many white people respond when faced with conversations about race, whether or not personal accusations are involved. She jumped on the defensive, taking the statement as an attack on her work rather than a critique of bigger issues in the music industry. And yes, Taylor benefits from these issues and from the lack of real public discussion around them—which is perhaps why she wanted to shut such a discussion down. Nicki’s rant wasn’t about Taylor, but it was about white privilege (and thin privilege). In other words, as Ann Friedman writes at NY Mag, “it is about you—just not in the way you thought it was.”

4. Accuse black feminists of being “divisive.”

When black women attack “white feminism”, they are forgetting who made it possible for them to have rights — as women. And, they are racist

Repeat after me: THERE IS NO SUCH THING AS REVERSE RACISM. Because, again, racism is not a personality trait. Whereas, say, “prejudice,” may be a trait some people have that can be applied in various directions, racism is more of a big-picture thing, and it refers to a long history of discrimination and oppression. “Reverse racism” is just a term some white people made up to make themselves feel less guilty, because there are few things that people in power love more than evading blame. Calling WOC who criticize white women “racist” is nothing more or less than an attempt to silence them. This kind of reaction not only relies heavily on a totally bullshit white savior complex which ignores the racist history of feminism in the U.S.; it also boils down to little more than the incredibly mature approach of “I-know-you-are-but-what-am-I?” When feminist WOC call white feminists out on their mistakes and on their bullshit, they are not trying to start “in-fighting.” They are trying to have their voices heard; their concerns considered. To shut this down with cries for togetherness is to fundamentally misunderstand what working together really means. If you are here for “unity,” be here for intersectionality. Be here for women of color.

5. Demand allyship when you’re not giving it. 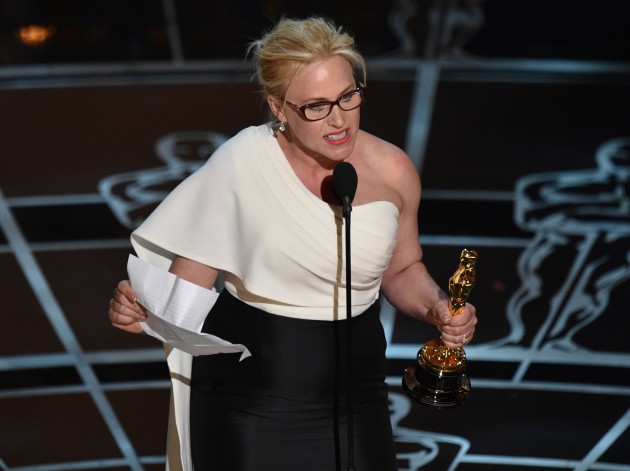 I was so excited to hear an actress on stage at the Oscars start talking about gender inequality, until I got wind of her backstage comments. “It’s time for all the gay people and all the people of color to fight for us now.” Girl, what? This reeks of the same “we paved the way for you”—white-woman’s-burden nonsense as Griffin’s comments above—and, again, ignores the racist history of feminism. But social justice isn’t about scratching someone’s back so they’ll scratch yours; it’s about dismantling systems of a oppression—a process which requires understanding how such systems connect. The pay gap is even greater for African-American and Latina women than it is for white women, and yet it seems to be a battle in which intersectionality is regularly ignored. The rhetoric of “it’s our turn now” is steeped in exclusion—her comments suggest that “all the gay people and all the people of color” are somehow in a different category than “all women,” despite the fact that gay women and women of color are disproportionately affected by the very things she’s trying to fight against.

A “blind spot” for race issues is one thing; purposely closing your eyes to them is another. When “Girls” debuted, Lena Dunham got a lot of criticism for her white-washed vision of the millennial experience (and her unrealistically white-washed version of Brooklyn), but more upsetting than her obvious blind spots were her own and her supporters’ (like Moran, above) insistent defense of them, which essentially boiled down to asking “why should she have to care about race?”

But the answer to this, I think, is simple: because not caring about race is a luxury that only white people can afford—and a luxury which, if we want to be allies, we have to be willing to give up.

Let’s return to Taylor and Nicki, for a moment. There’s an important phrase in Nicki’s response to Taylor that isn’t being talked about in media coverage of the so-called feud: “Didn’t say a word about u. I love u just as much. But u should speak on this.”

Did Taylor heed this call? Not really. She apologized for misunderstanding, maintained her own innocence, and moved on. Do many white feminists heed the call of feminist WOC asking them to include them, to talk about their issues? Not really. Whether Taylor really invites Nicki on stage with her if she wins, and whether she uses her platform to talk about racism in the music industry, remains to be seen—but that sad truth is that it’s hard to imagine a privileged pop star doing so. Why should she have to care about race? Well, because any sort of useful vision of feminist activism, of equality, and of “sisterhood” requires acknowledgement of these intersections.

There are TONS of feminists WOC who have been saying this for years, and have done a better job writing about it than I could. And you should be reading them. Here are a few links to get you started:

Songs You Won’t Be Able To Skip

Why You Need to Vote With Your Dollar All Year Long

Fast Fashion in the Midst of Two Global Pandemics

5 Critical Ways We Can Build Self-Esteem in Girls