Accepting That I Don’t Always Have To Be Happy

I spend my 32nd birthday in Cuba.

La Habana is a dirty, smelly, crumbling city where men leer at me and the hot air that tunnels through the streets cannot really be called a breeze since it is mostly exhaust and does nothing to cool my burning skin.

Men push old grocery carts hung with onions and garlic, and women stand at rod-iron gates, peering onto the streets. Dogs search for scraps, and laundry hangs from second-story balconies, dripping onto the broken sidewalk below. Friends sit in doorways smoking cigarettes, and horse-drawn carts clatter through the streets, pulled by dirty animals whose ribs show far more than they should. Bicycle taxis offer me a ride as I walk — no gracias, no gracias. 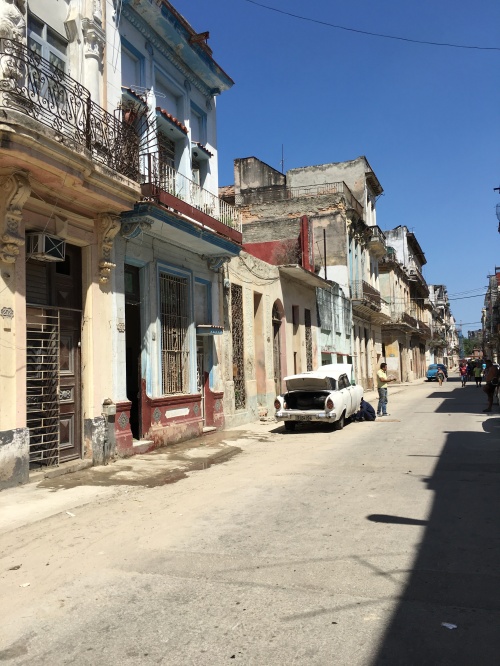 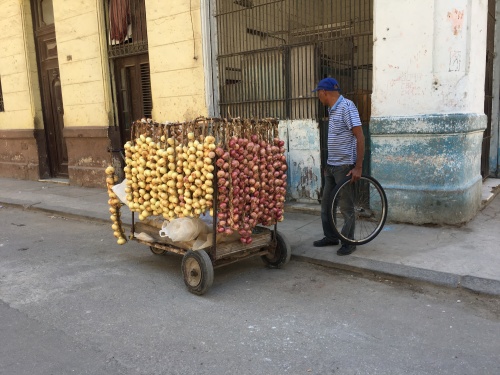 Fortunately, after just one day there, I hop in a taxi colectivo with a friendly American couple and their 12-year-old daughter, and we rumble down the highway in an ancient Ford in the direction of Viñales.

It is hotter here, if that is possible. The driver is thorough in his hand-off of me at my casa — he waits until my host and I physically connect before he takes his leave. The casa is also home to an old German Shepard named Luna, and she lies beside me on the cool tile porch while I eat breakfast the next morning, happy to take the pieces of cheese I slip to her.

My host, Tito, is a local climbing guide, and I join him and a group of eight others in a taxi that takes us to a new spot where they are still bolting routes and putting up first ascents. We take a trail through the forest, scattering wild pigs as we walk, bushwhack our way across a field as a group of six goats watches, and climb up the steep earth to the limestone rock face.

The wall is at an exhausting 45-degree angle, maybe more, and I do more watching than climbing. The limestone tufas are unlike anything I’ve seen before. In the afternoon, it tries to rain on us as we walk back to the road and catch taxies back to town. 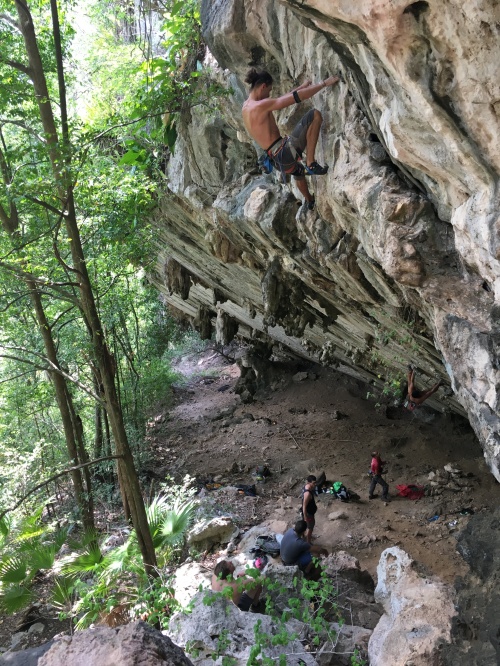 The next morning, I meet a friend at breakfast, an Italian climber who lives in L.A. and is also traveling in Cuba alone. Tito is busy running errands in Pinar del Río today, so we borrow his rope and draws and wander down the road to Raul Reyes’s finca, “the” spot for Viñales climbers — partially because you have to tramp across his property to reach a lot of the walls, and partially because I think Raul really likes being “the” spot for Viñales climbers. He keeps a huge tree rat on a leash next to the covered porch where he sells mojitos and fresh plantanos to weary climbers on their way back into town.

At Raul’s finca this morning, Ascanio and I run into four familiar-looking guys we’d both seen before. Ascanio climbed with them yesterday, and today, the six of us climb together. One of them is a Ryan Gosling look-alike; he and Ascanio conquer tougher routes on the huge, concave wall to the left, while I climb some routes to the right with our other three new friends. The spot is la Cueva de la Vaca, and it’s reached from this side by a long, steep staircase that goes straight up the side of the hill. At the back of the cave is a tunnel that deposits you on the south side of the land mass, at the edge of some other fincas. 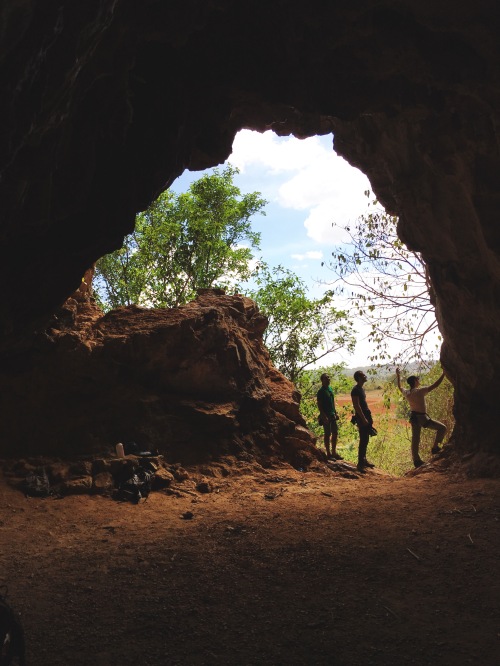 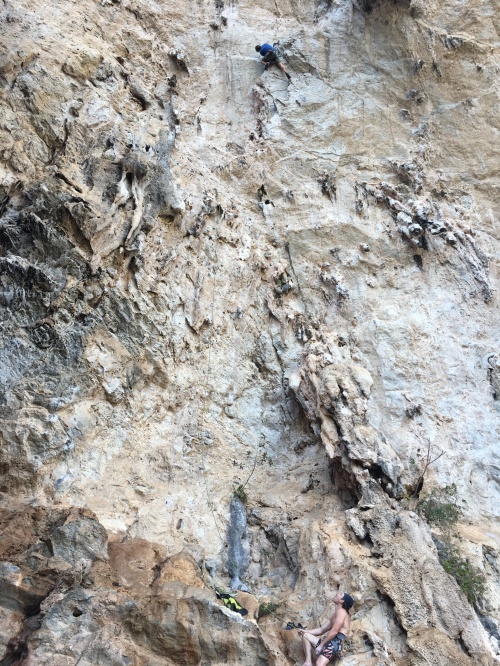 Later, we search for a pair of multi-pitch routes Ryan Gosling wants to climb. When we find them, it’s close to 7 p.m., and Joshua decides to head back to town. Three boys go up the line on the right, and Ascanio and I get to the second belay of the line on the left before bailing — it’s dirty climbing, and we’re losing the light. I leave Joshua’s headlamp, which he loaned me, in Devon’s shoe because our three friends will need it when they come down.

Ascanio and I have a drink at Raul’s and chat with him while I pull a puppy onto my lap and give him more love than he’s ever had in his life. Ascanio buys a cigar, Raul gives me two plantanos to go, and we walk back to town in the dark.

The next day is my birthday. Ascanio wants a rest day, and Cristian is sick. We lose two and gain one — Albina from Russia — and our group of five finds a taxi to take us to Competition Wall 2016.

We tumble out of the taxi at El Palenque, a bar built inside of a cave, and walk down the road to the right, to the limestone rock face awaiting us. We are not the only ones to have this idea today, but there are plenty of routes, and we climb alongside 10 or 12 other people, fighting the mosquitoes in the shade. The routes are fun, and the views from the top are great. 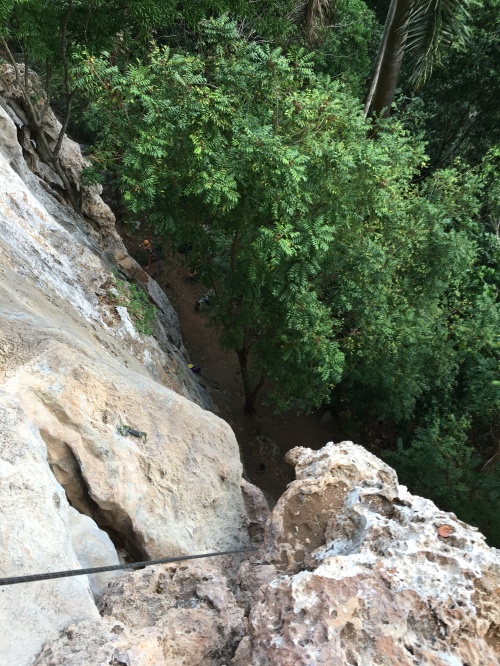 In the early evening, we walk back to El Palenque and stand by the road, sticking two fingers out every time we see a car come around the corner about three-quarters of a mile down the road. We are ignored by a couple of horse-drawn carts, a bus, and a few taxis that are already full before we finally hail a teal blue Chevrolet being driven in the opposite direction. The farmer agrees to turn around and take us back to town for seven pesos, so we throw our packs in the back and jump in.

The bench seats squeak as we bounce down the road, passing other ancient vehicles and two kids on bicycles leading a horse by the reins. Air rushes in through the open windows, and I close my eyes. 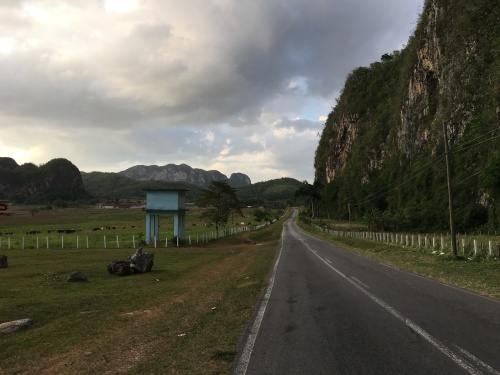 Later, I rejoin my climbing amigos in front of El Olivo on the main drag — this group cleans up well, and the boys have cigars tucked into their shirt pockets.

We are led to a table in the back of the high-ceilinged restaurant and are given menus. However, our resident Italian takes charge of the food and wanders off to have a discussion with the chef. They proceed to collect our menus, and we wait patiently at the table with double mojitos — our only job is to consume whatever arrives.

And consume we do: rabbit, duck, lamb, steak, seafood stew, beef lasagna — we are carnivores tonight, and it is good. Each wielding a knife and fork, we pass the plates around the table, sampling everything until we’ve slurped all of the meat out of the crab legs and revealed the bones of the birds and other creatures they have brought us.

At the end of the meal, when we are impossibly full, someone insists on a candle for me to blow out, and as I don’t think birthday candles are very common in Cuba, I am brought a large candle in a glass jar, lit just for me. They set it down next to a pineapple pie and a small flan. I blow it out. Ryan Gosling asks if I made a wish — I forgot. He immediately ignites a lighter in front of my face and insists I try again, so I do.

We are ushered out of the restaurant somewhat unceremoniously as they close and the wait staff prepare to drive 30 to 45 minutes in scattered directions to their homes. Pouring out into the still-warm air, we weave through the festivities of the final day of el carnival — the street is covered with trampolines and a moon bounce, a rickety-looking tilt-a-whirl, miniature ponies pulling children down the street in wooden wagons, and the smallest Ferris wheel I’ve ever seen, cheap jewelry and plastic toys for sale, fried potato slices, rum cocktails, music pounding out of 30-year-old speakers at deafening decibels, and everywhere Cubans dressed in their favorite clothes.

I don’t remember whose idea it was, but suddenly Ryan Gosling has removed his shirt and is getting Che Guevara tattooed on the center of his chest in airbrushed colors.

I don’t remember whose idea it was, but suddenly we have all gotten Che Guevara tattooed on our bodies, and it is the perfect birthday present. 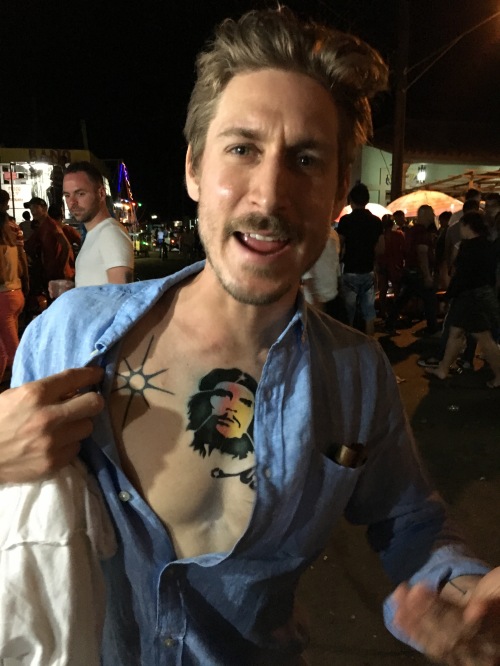 We leave the thumping sounds of el carnival behind and escape to the breezy balcony above my casa. Someone acquires beers, and the boys smoke their cigars. It has been a while since I’ve done this — wandered through a new country alone — and it’s all coming back to me. How to relax and remain open to what may come, how to keep yourself company, how to find value in every experience. Still, it is these moments you always hope for: new friends and surprises, a balmy night and a nice patio.

The thrill of the new is intoxicating, and even better if it is also strange. Viva Cuba libre, amigos.

You’ve Got to Try the Tiny Food Craze

The Best Places to Visit to See Australian Marine Life

6 Destinations That Will Help You Find Yourself Through Mindful Traveling